I am sharing an Iqbal Day 9 November Local Holiday Notification 2022. So, the deputy commissioner has announced local holiday in a notification issued today.

Dr. Allama Iqbal, known as “The Poet of the East,” doesn’t need an introduction. Let’s discover more about Iqbal Day and its significance in this blog, nevertheless, as November 9 is a national holiday honoring him and remembering his legacy. 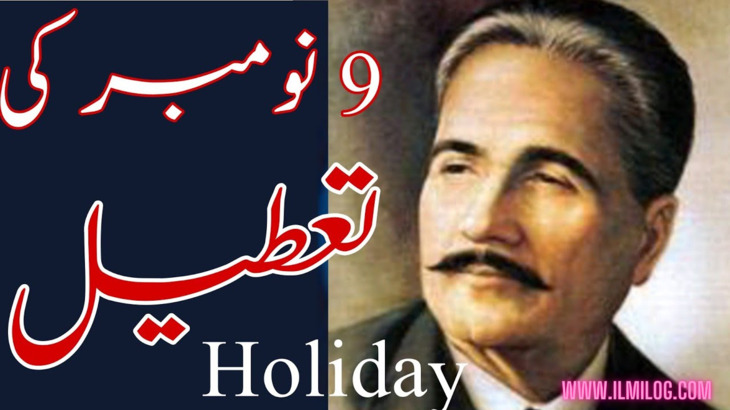 What does Iqbal Day mean? Who was Allama Muhammad Iqbal?

Iqbal was born in Sialkot on November 9, 1877, during the time of the British Raj in the subcontinent. Iqbal earned a living as a lawyer, but he gained notoriety for his mastery of Persian and Urdu poetry, which was produced in the classical form for public recitation.

In 1910, Iqbal emphasised the new dynamics of his ambitions and hopes during a lecture at Aligarh. His poetry’s topics, which dealt with the fading memories of Islam’s former glory, some concerns about its current state, and finally leaning towards a call for unity and change, reflected his beliefs.

Iqbal believed that this change could only be brought about by methodically guiding people through the three stages of obedience to Islamic law, self-control, and general acceptance of the notion that every Muslim has the potential to become a vicegerent of Allah by upholding the Divine commandments.

Iqbal’s Literary Success: The Road to It

The awareness of Iqbal’s intellectual journey to become Hakeem-ul-Ummat is another crucial aspect of Iqbal Day and its significance (The Sage of the Ummah). Iqbal graduated from high school in 1893, and in 1895 he began attending the Government College University (GCU). He received the Khan Bahadurddin F.S. Jalaluddin medal for graduating with a Bachelor of Arts in philosophy, English literature, and Arabic.

Iqbal earned a Bachelor of Arts degree from Trinity College, University of Cambridge, in 1906 while pursuing higher study. He received a barrister’s call to the bar at Lincoln’s Inn that same year.

Iqbal earned a Doctor of Philosophy degree in 1908 from Ludwig Maximilian University of Munich with a thesis titled “The Political Economy of the Indian Subcontinent.”

Iqbal started writing poetry in Persian, his favourite language because it was simpler to articulate his ideas, during his period in Europe (1905–1908). And he continued to write in Persian beyond this point. Iqbal was very interested in Islamic studies, particularly the Sufi philosophy.

Iqbal Day is significant because of its emphasis on spirituality. In addition to exploring independence beliefs, Iqbal also examined devotion to Allah and following the example of the Prophet Muhammad in his poetry (PBUH). Iqbal started practising law in 1908 at the Chief Court of Lahore, but he eventually stopped and turned instead to writing, becoming a vocal supporter of the Anjuman-e-Himayat-e-Islam.

Celebrate Iqbal Day on November 9 by honouring its significance.

The major goal of this day’s celebrations in all of Pakistan’s provinces is to honour Iqbal and recognise the value of his contribution to the Pakistan movement among the Muslim population of the region. He was the person who envisioned a distinct country where Muslims could live in harmony, thrive, and finally relish practising their faith in complete freedom.

We commemorate Iqbal Day because he made a significant contribution to the Two-Nation theory campaigns led by Chaudhary Rahmat Ali. Iqbal’s advocacy of this ideology was among the top reasons why the emergence of Pakistan evolved into a reality.

His remarks proved to be very effective in motivating the Muslim Ummah to fight for their rights and, undoubtedly, generated power and unity in their efforts for independence. He was a great politician and philosopher who inspired the idea of an independent Muslim state.

Iqbal dedicated the majority of his life’s work to advancing Muslim wealth. Not just for Muslims, his poetry turned out to be a potent instrument. People from all walks of life appreciate Iqbal’s writing, which provides a comprehensive philosophical and sociological examination of the conditions under which Muslims lived, as well as their opportunities for advancement and the discrimination they experienced. His poetry is timeless; even now, you can still find great value in any of his writings.

The Dr. Allama Muhammad Iqbal’s birthday is celebrated on Iqbal Day. Pakistan observes it on November 9 each year. On the occasion of Allama Iqbal’s birthday, admirers from various nations also pay their respects. Allama Iqbal was a revolutionary poet and philosopher who advocated for giving Muslims in the subcontinent their own homeland.

Iqbal Day will be observed on November 9, 2022, a Wednesday.

Wishes and messages for Iqbal Day

The actual head of the Muslim nation was Allama Iqbal. His work will live on in memory forever.

Our real leaders were Quaid-e-Azam and Allama Iqbal. May God grant serenity to their virtuous spirits.

Allama is appropriately referred to as Mufakir-e-Pakistan. His outstanding work will endure forever in memory. God have mercy on his soul.

Like his mentor Rumi, Dr. Iqbal was a valuable asset. I hope we can learn from their experiences.

In honour of our nation’s poet’s birthday, I’d like to wish you a happy Iqbal Day. I hope you and your family use this day well by reading Iqbal’s Kalam.