Today I shall share SST Teacher Scale in KPK 2022 BS-16 to BS-17. So, the directorate of elementary and secondary education KPK Peshawar has announced personal scale after 10 years completion of service.

However, the KPK government has announced reward for secondary school teachers in the province. Therefore, the director has issued a letter on 19-09-2022.

In addition, the khyber Pakhtunkhwa government has submitted this letter to all district education officers male.  So, the subject of this letter is submission of personal scale of SSTs male from scale 16 to 17 as personal scale.

In other words, they will get benefit after completion of 10 years regular service up to 30-09-2012. So, those teachers who have not promoted on personal scale. They will submit their files in the office.

The secondary school teachers are facing many problems in the country. So, they are protesting now in the country, and they are making new associations to get bonus like others.

At last, the government has announced to submit the files with covering letter through concerned DEO. 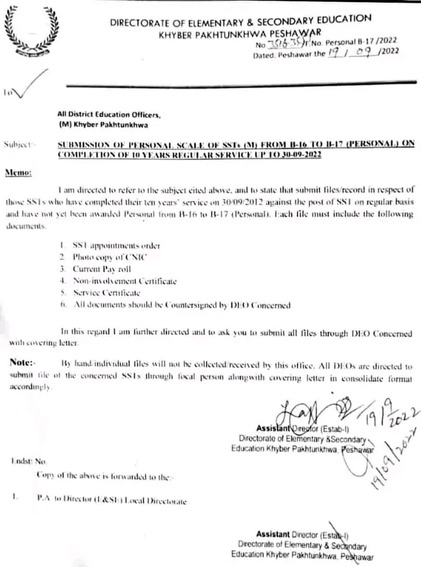