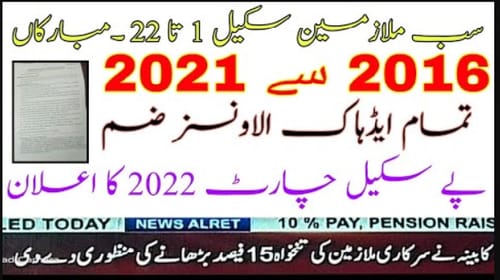 I am sharing 10 June Federal Budget 2022 Salary and Pension Update. So, the government of Pakistan has decided to give budget 2022-23 today. All government grand alliance (AGEGA) is protesting in the Islamabad in front of Parliament House.

However, the government of Pakistan announced two days before that they will discuss with IMF for salary and pension of employees. Therefore, all employees are protesting against IMF policy.

ISLAMABAD: The federal budget for the next financial year 2022-23 will be presented in the National Assembly on Friday. Dr Muftah Ismail (Federal Minister for Finance and Revenue) will present the federal budget and finance bill.

However, according to sources, there is a possibility of 5-10% increase in salaries and pensions of government employees before budget. But after budget 15% salary increased. So, Income tax exemption abolished and regulatory duty on luxuries and non-essential items increased.

I think, the govt will present this budget in the evening 4 PM. So, they will discuss about the salaries and pension for the families of employees. They are protesting in Islamabad. The police is trying to control the situation near parliament house of Pakistan.

Who was most affected by unemployment during the Pakistan Tehreek-e-Insaf (PTI) -led government? This news will surprise you that Pakistani youth, who were loyal to Imran Khan. But they suffered the most as the youth unemployment rate was almost double the overall unemployment rate.

The finance minister has earmarked Rs 1242 billion in the form of grants for the financial year 23-2022. Similarly, Which includes grants from Bait-ul-Mal, Benazir Income Support Program and other departments.

In the federal budget, the finance minister has increased the amount of Benazir Income Support Program from Rs 250 billion to Rs 364 billion.

Under the next financial year, under the BISP, the government will provide 9 million families with the facility of Benazir Kafalat Cash Transfer Program for which they have allocated Rs. 266 billion.

15% Salary Increase in the Budget: