In other words, the government has ordered to pay and pension commission for the latest report as soon as possible.

Salary Increase Update 2022 before the budget in January

AUDIENCE: As you know, a committee of three ministers, Ali Muhammad Khan, Pervez Khattak, and Sheikh Rashid, was formed as a result of the protests last year. And the committee has been successful in providing some relief to employees over the past year. But could not bring complete relief.

However, they said different things here. Among them is the fact that previous governments have emptied the coffers. In this way, the employees also did not give up and got a disparity allowance.

This year, all the representatives of Agiga met again two days ago and all of them have said the same thing. He will have to pay this year. In which he said that due to this inflation at least 35% increase in salaries and pensions. In this regard, Agiga has written a letter to government representatives on December 14, 2021. The government has presented the minutes of the December 15 meeting.

You May Also Like: Pakistan Budget 2021-22 Salary Increase Chart Summary

After that, the government itself proved this by writing a letter on December 30, 2021. That the inflation rate will increase this year.
Viewers Let me also tell you that two days ago again all the employees of Agiga met in Islamabad in which it was decided that if this relief is not given by February 10, 2022, then there will be a big protest like last year. January 15. There will be another meeting after 2022 to discuss progress.

AUDIENCE: Now the government’s December 30 letter proves that the government is serious about increasing salaries and pensions in line with inflation.

Viewers, before you go into details, ask if you are new to this channel and have not yet subscribed. So subscribe soon and thank those who have subscribed. 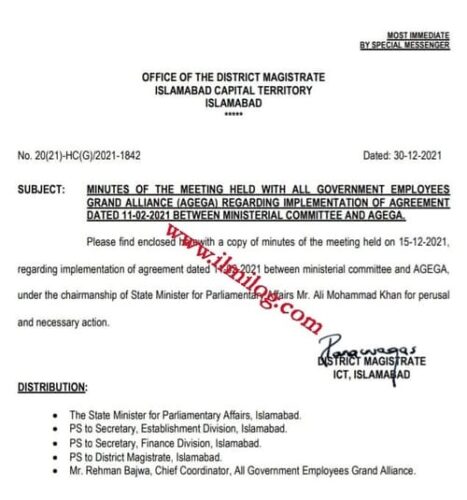