Today I talk about Amendment in Section 12 of the Punjab Civil Servants Act 1974. So, the government of Pakistan has created a new act 2021 for govt employees. The cabinet has approved this act.

However, the government has amended this act 1974. So, I am sharing here a letter of services and general administration department Punjab. In addition, all provincial government will work on it and now employees will perform their duties till 55 years Age.

Amendment in Section 12 of the Punjab Civil Servants Act 1974

Similarly, this letter has been submitted to all secretaries concerned, members, commissioners and heads of attached departments. So, the cabinet of Punjab provincial assembly has approved this amendment on 29-10-2021.

Amendment of Clause ii of Sub-section (1):

” Where no direction is given under Clause (I)”: 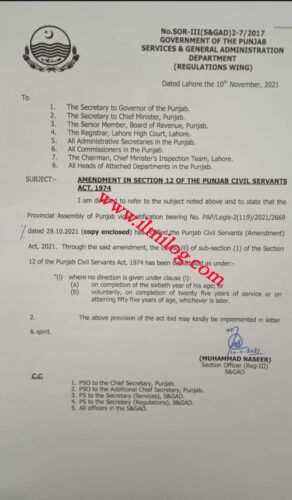