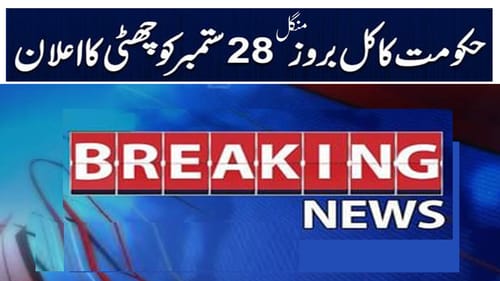 The Chehlum of Hazrat Imam Hussain &  Urs of Data Ganj Bakhsh has started in Lahore. So, the government of Punjab has announced a local holiday in this regard.

In addition, the services and general administration S&GAD has issued a notification of district holiday. However, the secretariat and federal employees will work.

On the occasion of the annual Urs of Hazrat Ali Hajwary alias Data Ganj Bakhsh, the Punjab Government declared a public holiday at the local level yesterday (September 28). However, the Punjab Civil Secretariat and affiliated agencies will remain open as usual. ۔

A local holiday has been announced in Lahore on Tuesday on the occasion of Chehlum of Hazrat Imam Hussain and Urs of Sufi saint Hazrat Data Ganj Bakhsh. The Punjab Government S & GAD Department has issued a notification for tomorrow’s local holiday, stating that district government offices and educational institutions will remain closed tomorrow. However, federal agencies and civil secretariats will remain open.

Today is the second day of the annual 988th Urs celebrations of Hazrat Data Ganj Bakhsh. Devotees from all over the country, including Lahore, continue to come to seek blessings. A large number of female devotees also attended and asked for prayers. Visitors lined up and waited for their turn to attend.

The administration has organized a special hearing at the Data Darbar, in which eminent poets from all over the country offered their devotion. Provincial Ministers Pir Syed Saeed Al Hassan, Mian Aslam Iqbal, and Hafiz Mumtaz also attended the hearing. The provincial ministers said that following the teachings of Hazrat Data Ganj Bakhsh could bring peace to the society.

Devotees who came to the Data Darbar said that they come here to seek spiritual blessings. So, the police have made Strict security arrangements on the occasion of Urs. While anchorage has also been arranged for the visitors.