Today I am sharing a piece of news on BISE Mardan Board Result 2021 – Position Holders KPK. So, the board of intermediate and secondary education Mardan has announced result 2021 inter part II.

However, maximum students in Pakistan are awaiting results this year. Due to the COVID closure of educational institutes, the board administrator has arranged papers later this year.

In addition, I talk about the BISE Mardan board result today. So, the board of intermediate and secondary education has announced position holders. This year, there is a strange thing in the position holder’s 2021.

So, I share a complete picture here below. A female student Qandeel D/O Sohail Ahmed has appeared under Roll No. 113171. So, she got 1100 out of 1100 which is very strange. Such that her position on the board is first. So, she was studying in the student model high school Akora Khattak Nowshehra.

Similarly, Farhan Naseem S/O Farman Ali has appeared under Roll No. 139461. So, he got the second position in the BISE Mardan. He has secured 1098 out of 1100. He was a student of the Peace School Nowshehra.

You can see in the detail given below. 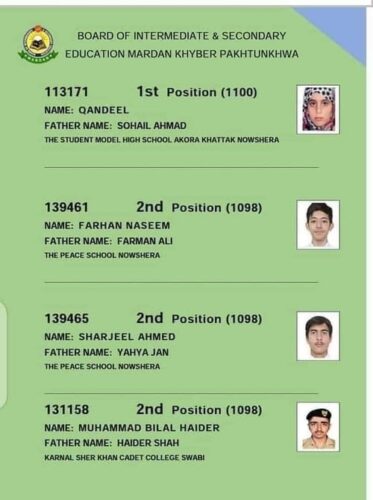