KPK govt has issued a letter regarding General Provident Fund & Mark-Up Rates 2020-21. So, the finance department KPK has submitted a letter to the accountant general KPK Peshawar.

However, the government of Khyber Pakhtunkhwa has issued this letter on 17 August 2021. Similarly, the KPK govt has issued the same letters as the federal govt and Punjab Provincial govt.

In addition, the KPK govt has referred to a previous letter of federal govt here in this letter. The finance division of Pakistan has issued that letter on 12 August 2021. 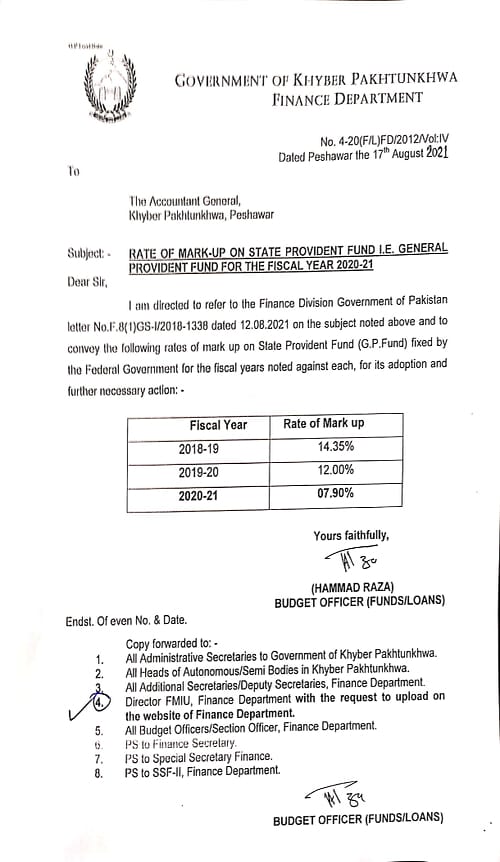 However, the govt has coordinated to allude to the Finance Division Pakistan Government letter dated 19.07.2018 regarding the matter noted above and to pass on the accompanying rates of increase on State upon State Provident Fund (G.P. Store) settled by the central Government, for its selection and further important activity: –
Fiscal Year Markup GPFund Rates
2015-16 11.10%
2016-17 11.30%
2017-18 11.70%

You May Also Like: Punjab GP Fund Interest Rates update in 2021 (Markup Rates)

Corona Virus & Holiday Season 2020 Closure of All Educational Institutes
How Many Public Holidays in 2022? Notification Issued
How to write for Restoration of Commuted Pension after 15 years
KPK Winter Vacations 2019-2020 extended for all schools in the Province
Prime Minister Ehsaas Program Online Registration 2020 Complete Detail
Casual Leave Rules 1981 in Urdu for Punjab Government Employees