Guidelines for Pay Fixation of Employees have given working on Deputation Basis. The Government of Pakistan Finance Division (Regulation Wing) has issued an office memorandum F.No. 4(9) R-2/2018-417. So, it has issued on 29 June 2021.

However, the government has given proper guidel ines to fix the pay of an employee on deputation.

Guidelines for Pay Fixation 2021 of Employees on Deputation Basis

Subject: GUIDELINES FOR FIXATION OF PAY OF EMPLOYEES OF AUTONOMOUS/SEMI-AUTONOMOUS BODIES OR CORPORATIONS ETC WORKING ON DEPUTATION BASIS IN FEDERAL GOVERNMENT

In addition, the pay fixation 2021 of an employee of Provincial Government. Similarly, an employee of an autonomous, semiautonomous body or corporation.  So, they say any other organization set-up established owned, managed, or controlled. The Federal Government who has appointed on deputation basis against a civil post shall be fixed as per following guidelines:’ 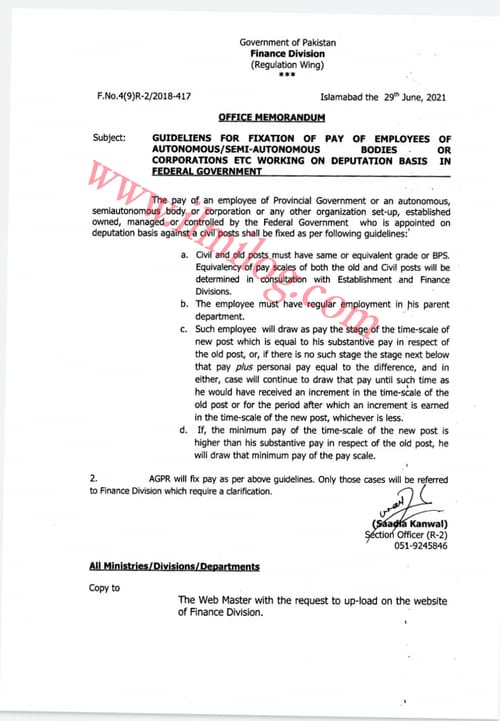