A letter has written for Early Childhood Education ECE Provision of Funds for Salary.  So, the School education department SED is working on this program. Therefore, this letter SO(ADP)ECE-412/2012(ECE-2015-16) has submitted on 26th June 2020.

However, it has submitted to the director QAED Lahore. So, SED is working on this program for the last year.

In addition, the subject of this letter is the ECE provision of funds for salary to caregivers in all Punjab districts. In an earlier letter on 09-02-2016, it has clarified early childhood education remuneration.

Above all, remuneration has fixed @4000 per month for caregivers. So, only those caregivers will take remuneration who are working already in ECE school centers of Punjab.

At last, the headteacher of the school will give remuneration from NSB funds. So, the school education has instructed that they will give after fulfilling procedural formalities.

Similarly, the government of Punjab school education department has clarified remuneration during summer vacations. It has said that caregivers will take remuneration @2000 per month. So, it means that they will take half of the monthly honoraria. 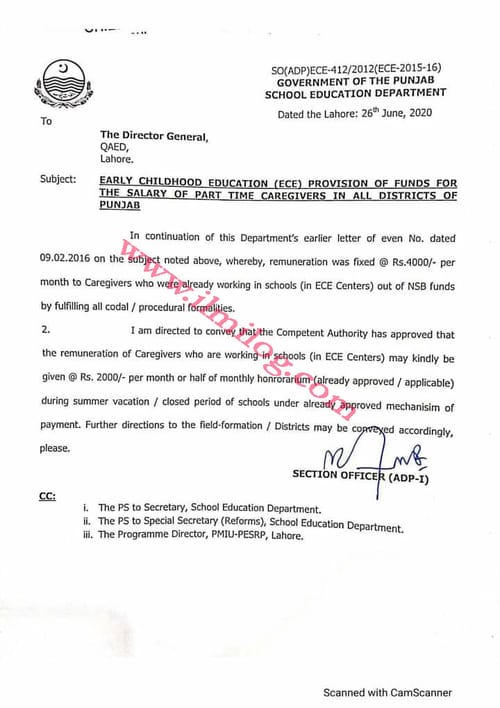