Latest Budget Update News 2021 after Protest on D-Chowk. So, the government agrees to increase salaries for employees of Pakistan. 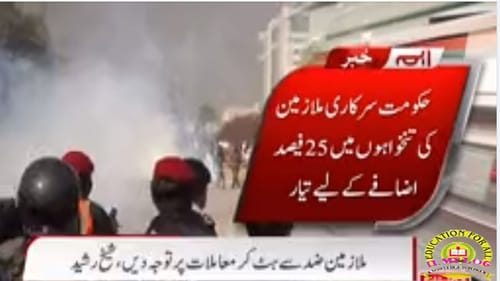 Government announces a 25% increase in basic pay for government employees. on 10th February, govt employees have gathered on D-chowk Islamabad.

However, the government is announcing a 25% salary increase in budget 2021.

Islamabad (News Reporter) Today’s big news is which the government announced a 25 percent salary increase. You will know that negotiations have been going on between the government and the employees for some days now.

When government employees announced a sit-in at Islamabad D-Chowk on February 10, a solution was reached in the cabinet and the cabinet formed a committee of ministers comprising Sheikh Rashid, Interior Minister, Ali Muhammad Khan, and Defense Minister. But the talks did not succeed.

After the failure of such negotiations, the employees had to gather at D-Chowk on February 10. And in the morning they gathered. But their leader was captured in the darkness of night. Similarly, according to eyewitnesses, when the release of the top leadership and chanting of slogans started and the employees took the lead, the police fired tear gas shells which also injured some employees.

Read more in Urdu. There will be protests all over the country. Now it is very difficult to be patient. A big announcement has been made.

Many employees were also arrested. But the morale of government employees is high and they are continuing to push.

On the other hand, the government committee says that the salaries of the employees cannot be increased at will. But 25 percent on basic pay are ready to raise salaries up to grade 16.

The defense minister says that if the employees want their own salary, then they will have to wait.