25% Allowance on Running Basic Pay for Federal Employees. The Pakistani government Finance Division has issued a summary for cabinet approval. So, I am uploading a complete summary detail here on this page for employees of Pakistan.

Subject: – GRANT OF DISPARITY REDUCTION ALLOWANCE TO THE EMPLOYEES

A structure of Unified Pay Scales was introduced in 1972 for all government servants. However, since 2009, disparities in salaries have occurred. Because employees of various government establishments had allowed 100 percent to 300 percent of the basic pay as allowance.

It is, therefore, proposed that till such time that a new salary structure is adopted on the recommendations of the Pay and Pension Commission, a ‘Disparity Reduction Allowance’ of 25 percent of the basic pay of RS-2017 may be allowed w.e.f 1″ March 2021 to those civil employees in BS-1 to BS-19 of the Federal Government (including employees of the Federal Secretariat and attached departments) who have never been allowed additional salary equal to or more than 100 percent of the basic pay (whether frozen or otherwise) or performance allowance.

Moreover, Finance Division may recommend to provincial governments to consider adopting the proposed disparity allowance for their employees, to be funded from provinces’ own resources. 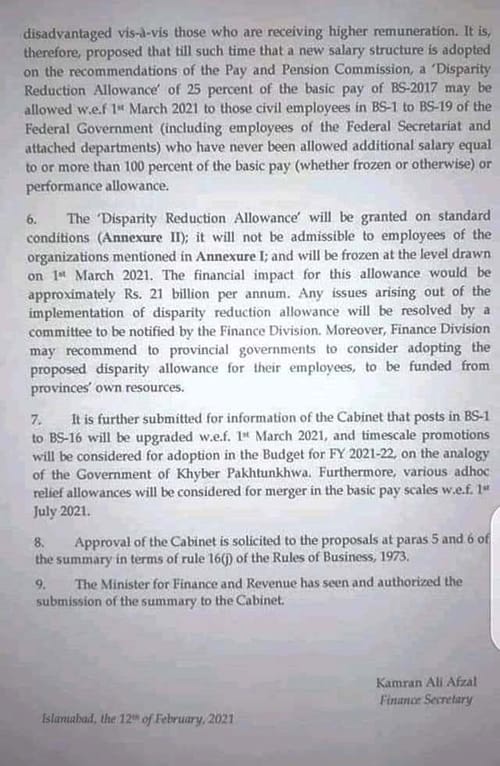