Finance Department Notification has issued regarding Special Judicial Allowance. So, the Punjab govt has announced in this letter. Therefore, this letter has submitted on 25th January.

In addition, the government of Punjab has issued a letter FD-SR/IV-3/19-2020. So, the finance department has clarified regarding special judicial allowance.

However, the letter has written to the registrar LHC & district courts. The subject is about special judicial allowance revised @1.5 times of basic pay. So, it has referred to previous letters issued in March & July 2019. After these letters, CM Punjab has pleased to approve this allowance.

In other words, this allowance has frozen that time. But now, the chief minister approved to unfreeze under article 240 section 23 of Act 1974.

However, this allowance was admissible as equal to 3 times of initial basic pay. At that time, the govt has announced admissibility according to the basic pay scale 2008.

Now, it has allowed & revised as per basic pay scales 2017. Similarly, that allowance is admissible to court employees @1.5 times of basic pay. So, the judicial officers (members of Punjab judicial service) will get it w.e.f 01-03-2019. 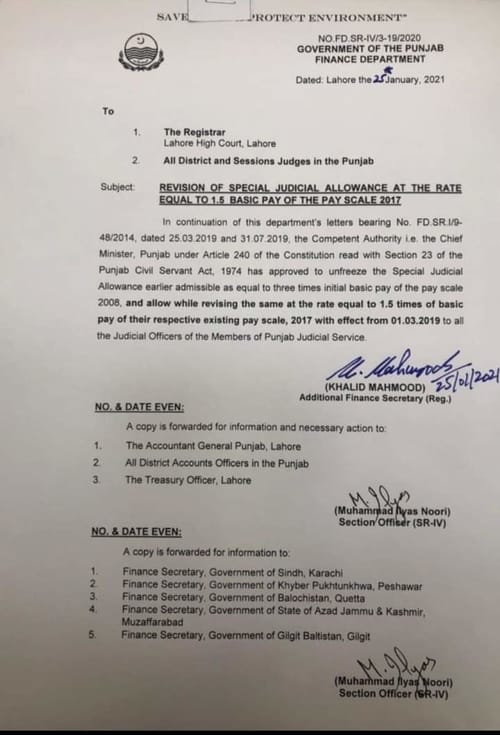