However, It has submitted from Imran Rashid Section Officer to the Accountant General Pakistan Revenue Islamabad.
Subject: GRANT OF HONORARIUM EQUAL TO THREE MONTHS PAY FOR THE OFFICERS AND STAFF OF THE AGPR
In addition, as per an office of Accountant General Pakistan Revenue’s Summary bearing No Admn.1/. 14/2018-19/1608 dated 14 06 2019 regarding grant of honorarium .1.1 to three basic pay to officers and staff of the office of AGPR amount, to Rs. 186 million
Advertisement
The Chairman Economic Coordination Committee/Adviser to Prime Minister on Finance Revenue. Economic Affairs has been pleas. to approve in principle grant of honoraria equal to two month’s basic pay to the officers/officials of the office of AGPR and its subordinate offices subject to the condition that fund, requirements will be met from AR regular Budget of relevant Head of Accounts during the next Financial Year 2019-2020, keeping in view the fact that amount for grant of honoraria cannot be provided through Supplementary Grant.
Read More: Monthly Basic Pay Increase 2019 for Federal Employees 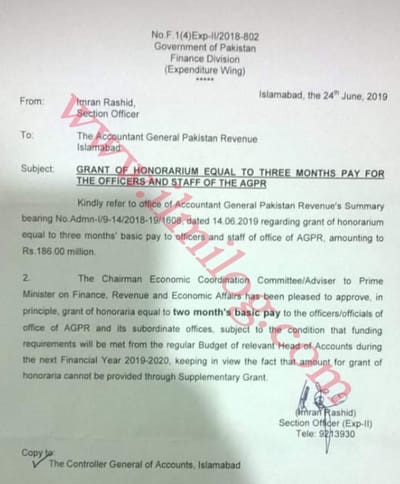