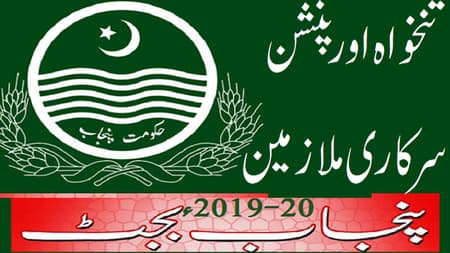 LAHORE: The Punjab government presented a budget for Salary & Pension Increase. So, the new financial year 2019-20 in Punjab Assembly has updated. Totaling the total volume of Rs. 23.60 crores. In addition, Provincial Minister for Finance presented the Punjab budgetary budget in Punjab Assembly.
However, the total volume of the Punjab budget is about 235 trillion rupees.
In other words, according to the details, the budget for the new financial year 2019-20 in Punjab. That has kept at Rs. 235 trillion, which has allocated 350 billion rupees for development projects.
Advertisement
Provincial Finance Minister Hashim Jagan is offering Punjab budget 2019-20. So, according to the document, Punjab has expected to get Rs 1494 billion in NFC. The provincial income volume will be Rs 368 billion.

Salary & Pension Increase in Punjab Budget 2019-20 for All Grades

The Punjab budget has announced that 35 % of the next financial year budget. So, it is being allocated to South Punjab. It will be budgeted to spend the budget in those areas.
In the budget, 437 billion has been made for local governments. While 279 billion have been allocated for service delivery costs.

A total of Rs. 382.9 billion has allocated for education. out of which 39 billion rupees have kept. It has announced that the establishment of universities in five districts including Multan and Bahawalpur.
Along with this, the committee has reiterated that a university has established in every district of Punjab till five years complete.

The Punjab government has allocated a budget of Rs. 308.5 billion for health. Which is 8.4 percent higher than the previous government’s health budget. So, the budget has allocated a maximum of 2 hospitals in Multan.
The Minister of Finance Punjab announced in his speech that 9 hospitals have built-in different cities. These hospitals have constructed in Layyah, Multan, Mianwali, Lahore, Rahim Yar Khan, Bahawalpur, Rawalpindi, and Dera Ghazi Khan.
Above all, the District Hospital of Lahore has ranked as a university. While the Bahawalpur hospital has set up as the latest Hospital.
To ensure access to the health facilities of the public, 2 billion have allocated for the cardinal card.

Because Punjab is an agricultural area, so Rs. 113.6 billion has allocated to the Punjab budget 2019-20. For the welfare and improvement of farmers, which will help farmers to be compatible with modern technology.

According to the budget document, tax the estimation has been set up to Rs 283 billion, with a 36% tax increase, beauty parlors in Punjab, hairdresser proposal to bring tax net, doctors. So, the sector has also proposed to bring the tax net.
Speaker Punjab Assembly Pervaiz Elahi met with the budget meeting. Provincial Finance Minister Makhdoom Hashim Joo Bakhti started the budget, opposition parties began rioting. It has disbursed copies of the budget after which Speaker Punjab Assembly Monday Suspended the meeting.
During his speech, the Finance Minister said that the budget has allocated 383 billion rupees for the education sector. the allocation of Rs.17 billion for Punjab facilities in 68 colleges of Punjab has proposed.
Hashim Jha Bakht says I will be made a college/ university in every 36 districts.
During the budget speech, the Minister said that 100,000 elderly people over 65 years of age will be given a monthly 2 thousand.
Hashim Jho Bukh said that a guardian program will be started for widows and orphan children costing 2 billion rupees, monthly wages will be given to widows for financial support.

In the non-development budget, only a 2 percent increase has increased by 60 percent. So, the growth budget has proposed 47 % from the fiscal year. The development budget in the Department of Education has kept at Rs. 382 billion 90 million.
The total budget of the health sector was Rs. 308 billion 50 crores, after the increase of 24 % for agriculture was Rs 123 billion 60 crores. It has proposed to spend 181 billion rupees on public protection and security, 337 billion rupees has spent on salary, 244 billion rupees will be Rs. 90 billion for a pension. 437 billion has released under the financial commission ongoing expenses It has proposed to spend 1298 billion rupees per year, tax and non-tax income in the next financial year has expected to be Rs 388 billion 40 crores.
Punjab Revenue Authority will collect 166 billion rupees and the board of revenue will collect 81 billion rupees.
Salary & Pension Increase in Punjab Budget 2019-20 for All Grades of Govt Employees