Salary Increase after Budget Speech 2019-20 for Govt. Employees Pakistan has updated here on this page.

The government has increased salaries of 10% for the employees of Pakistan.

ISLAMABAD: The government of Pakistan Tehreek-e-Insaf (PTI) has announced a salary increase of 10% increase in salaries of Bs-01 to BS-16 government employees in the budget speech 2019-20 of Rs. 30 crores for the next fiscal year.
Minister of State for Revenue Hamad Azhar told in his budget speech 2019-20 that government and Pak army employees from grade one to grade 16 will be paid 10 % on basic pay of 2017, while the salary increase of employees from grade 17 to 20 will be given 5 % ad relief on the pay scale 2017.

The Minister of State said that salaries of grades 21 and 22 civil employees will not increase.

The Minister of The state has also proposed a proposal to set a minimum salary increase of Rs. 17500 in the country for the next year in its speech.

The APCA rejects a 10 % increase in the salary of employees up to BS-16 and will soon call the strike by advising the central leadership.
Advertisement
According to details, according to details, District President APCA Muzaffargarh said in a statement issued to the media that overall inflation has increased by almost 50 % in the past year due to the increase in petroleum products and dollar growth cost all things to the sky. We reject 10 % of salaries.

Federal Minister has presented a budget 2019-20. Speaker National Assembly Asad Qaiser presented a budget meeting in the National Assembly. The current government party, Pakistan Tehreek-e-Insaf’s Minister for Revenue Hamad Azhar presented the first annual budget of his government. The volume of the first budget of the Government of Pakistan Tehreek-e-Insaf (PTI) has been kept at Rs 7.22 billion.
Rs. 1800 billion has been allocated for the development works in the budget while the target of tax receipts has been kept at 550 billion. The federal budget deficit will be Rs 3560 billion. The new budget paid class slabs have been replaced. According to the new financial year budget, no rupees will be applicable for Rs. 50,000 monthly salary.
The minimum rate of tax imposed on the paid class will be 5 percent and more than fifty %. 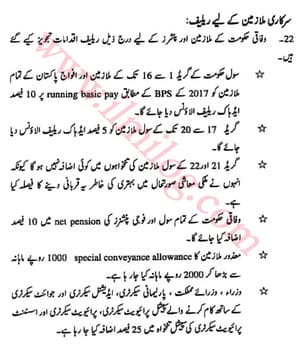