The Chief Executive Officers CEOs have updated Punjab Primary School Conversion.  The Old Maktab Schools have converted in the Districts of District Education Authority (DEA) Punjab.
A letter has issued having No.  3064 /P-II. So, the Directorate of Public Instruction (Elementary Education) Punjab-Lahore has issued dated 13-06-2019.

Reference on the subject cited above.
In addition, Masjid Maktab Schools are still functioning in 14 districts of Punjab as per information provided by CEOs concerned. So, the performance of Maktab Schools has observed minutely. Therefore,  it has concluded that such schools are unable to provide quality/ quantity education.
However, the main reason behind their failure is that such schools are providing education only up to class 3 level. So, there is no proper regular funding I budget allocation like other existing regular primary schools.
Furthermore, in some Masjid Schools, only one teacher and Pesh Imam have appointed. Therefore, such strength is inadequate to run the institution smoothly/efficiently.

In other words, the Government of Punjab, School Education. Department has decided to convert all existing Masjid Maktab Schools into regular primary schools.
In this regard to know the factual position, all the CEOs were requested to intimate the numbers of Masjid Maktab Schools working in their districts.
The following CEOs (DEA) have intimated that Masjid Maktab Schools are still functioning in their districts. The information provided by the CEOs has reflected hereunder for ready reference. So, further to verify the detail of the number of schools according to information /data of PMIU has mentioned below.

While comparison the statement provided by the respective CEOs with PMIU as mentioned in the above table. So, it appeared that there is a difference in the numbers of Masjid Maktab Schools. Which needs to be verified. Hence, its verification is urgently required from CEOs with their own signatures.
Advertisement
Therefore, It has come to the notice of the undersigned, during the visit of T.T. Singh that in some cases the land donated for Masjid Maktab Schools has not yet transferred to the concerned authority.
Such deficiency may create problems for the department while converting Masjid Maktab School into a regular primary school. Therefore, please take immediate necessary action to get. Similarly, the transfer in favor of school through Deputy Commissioner.

Copy of Fard, Initial, “KHASRA” Number, etc may be arranged/collected from the revenue department / Patwari/Tehsildar of each Masjid Maktab School.
However, It needs your immediate and personal interest to approach the Deputy Commissioner. So, get it complete.
The feasibility report of individual cases/schools may be prepared strictly in accordance with notifications. The guidelines issued from time to time by the department with regard to the conversion of Masjid Maktab Schools into regular primary schools. Similarly, as well as follow the criteria introduced for the establishment of new primary schools.
In addition, while preparing a feasibility report true picture of existing Masjid Makita Schools may be reflected. Moreover, a sketch of the building, number of rooms, available facilities, condition of furniture, availability of boundary wall, electricity, drinking water may clearly be mentioned in the feasibility report.
So, the number of population/inhabitants is also important as explained in existing criteria regarding the establishment of new primary schools.
According to the norm/criteria the population of the Abadi should not be. less than five hundred, no girls/boys primary school should function in the radius of 01 km. 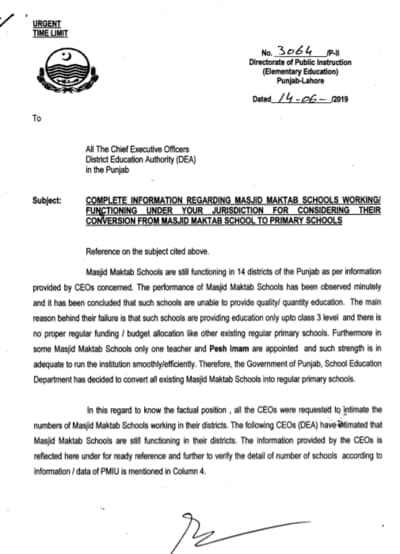