The government has announced holiday Muslim holidays from 4 to 7 on Eid al-Fitr. But the employees can only make 9 holidays. They may apply only one application. Many government employees have planned to leave for 9 days’ leave on June 3.

According to the notification of the Ministry of Interior, the government has announced Eid al-Fitr’s official holidays. The employees will celebrate eid on Friday from June 4 to  June 7.

There are 2 official holidays before Saturday and Sunday before the commencement of the Eid holidays. On the other hand, the government has announced the holidays of Eid from Tuesday to Friday, such as government employees, just one day, i.e. on Monday, June 3. By applying, you can enjoy 9 holidays. So, Official employees have started planning with family members regarding their long holidays.
Advertisement

Remember that the government announced the eighth al-Fitr holiday last day. According to the notification issued by the Federal Government, Eid holidays will be from 4 to 7 June. Notification issued by the federal government
Notification issued by the federal government
However, It is noteworthy that the last century of Ramadan continues, as the Eid al-Fitr is coming closer, so the purchase and preparation of the festival are increasing.
Lastly, According to the Meteorological department, Eid al-Fitr in Pakistan will be on June 5. While the Ministry of Science and Technology has announced to be celebrated on the 5th of Eid according to a calendar, Mufti Munibur Rehman, head of the Ravi at Halal Committee, has called on the Ravi at Hilal Committee on June 4. The Ravi Hilal Committee will see the moon and after the testimony, the history of Eid al-Fitr will be announced after the martyrdom. 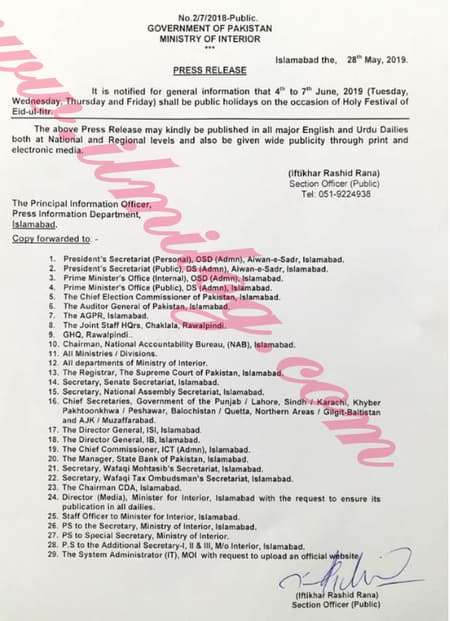 Eid Muslim Holidays 2019 for All Govt. Employees on 4th June to 7th June

1 thought on “Eid Muslim Holidays 2019 for All Govt. Employees Pakistan”