Notification No. FD.PC 40-12/2017 by a government of Punjab finance department has issued. So, the Stagnant Posts Time Scale Promotion 2019 to Punjab Employees dated Lahore, the 19th of April, 2019.

Subject: OFFICERS TIME SCALE PROMOTION 2019 IN BS-16 & ABOVE with STAGNANT POSTS.
It has directed to refer to the subject cited above. So, that the Governor of Punjab has pleased to allow Time Scale Promotion twice in their entire service. In addition, to the officers/officials with effect from 01 02.2019 in the following prescribed manners:
if an officers/authorities who have served for over 10 years of administration on a similar scale regardless of whether they have the chance of advancement, yet they are not elevated because of a couple of quantities of posts in the upper level might be moved up to the following scale as close to home to them as a regulation for one time, subject to a given condition.
Advertisement
if all having an attractive/decent record of administration. II-All officers in BS-16 and above having stale posts may likewise be permitted Time Scale Promotion on finishing of 10 years’ palatable administration twice in their whole administration.
Read More:

So, the premature increment is not admissible on the grant of time scale
Lastly, all the Department(s/ Attached Departments have requested to take further necessary action to implement the above policy
Download Full Notification TIME SCALE PROMOTION BS-16 & ABOVE 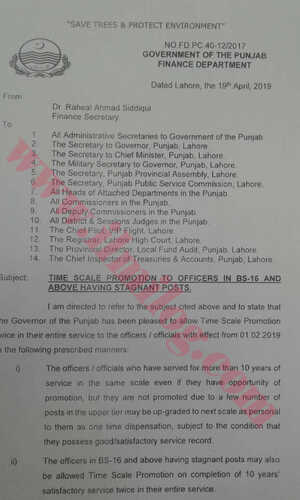