Advertisement
Time Scale Promotion Summary Approval by CM Punjab for Govt. Employees
Chief Minister Punjab has approved the summary of time scale promotion of Punjab employees having 10 and more than 10 services in their tenure. More detail is given below.
TIME SCALE PROMOTION TO EMPLOYEES HAVING PROMOTION CHANNEL
Chief Minister has seen and is pleased to approve the proposal of Finance Department Contained at pare 07 read with paras 10-21/ante.
2 Further, necessary action may be taken accordingly.
Principal Secretary to Chief Minister. Punjab
CHIEF SECRETARY
SECRETARY FINANCE 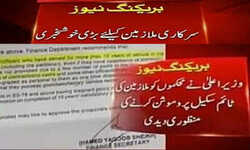 In view of the above. Finance Department recommends Mat-The officers/officials who have served more than 10 years of service on the same scale (including The petitioner), even if they have an opportunity of promotion but they are not promoted due to a low number of posts in the upper tier e.g., incumbent of clerical/ steno cadre and some other officer /official posts in the field may be upgraded as Personal to them as one time dispensation subject to the condition that they possess good/ satisfactory service record.
The officers in BS- 16 and above having stagnant posts may also be allowed time scale promotion on completion of 10 years satisfactory service twice in their entire service.
Chief Minister may like to approve the proposals contained in Para 7/ante.
Related Topic: Finance Department Punjab Notification Time Scale Promotion 2019 after 10 Years
FINANCE SECRETARY, SECRETARY (Regulation) S&GAD
CHIEF SECRETARY, CHIEF MINISTER
Time Scale Promotion Summary Approval by CM Punjab for Govt. Employees
DOWNLOAD FULL SUMMARY Here Approval by CM Punjab for Govt. Employees