However, directed to refer to the subject cited above_ 2.Similarly, further directed to slate that School Education Department, on approval of Chief Minister Punjab, relaxed the ban on transfers/postings in respect of applicants whose applications were treated (from 1st April to 31st May) as per Notification SO(SE-IV) 07-28/2018 (Transfer) dated 30-10-2018 and issued timelines for transfers or postings adjustments. As per notification dated 30-10-2018, the process was to be completed up to 20 11.2018.
This Department again vides Notification No SO (SE-IV) 7-282018 (Transfer) dated 13 11 2018 relaxed ban on transfer / posting for fresh applications as per timelines issued vide Notification dated 13 11 2018. The govt will complete the transfer/posting process on 31.12 2018.
3. In addition, this department has received a number of complaints. wherein complainants have submitted that being on merit for transfer/posting. They have not adjusted against the vacant posts In this regard. CEOs (DEAs) have also approached this Department for guidance. So, there is permission to adjust those incumbents whose applications are processed as per timelines.  are given in the aforementioned Notifications but were not adjusted due to late approval from the concerned Transferring Authority.
4. I am, therefore, directed to advise you that all those applicants whose applications were processed as per timelines are given in the Notifications dated 30.10.2018 & 13.11.2018. After fulfilling all coda! formalities, and were on merit for posting/adjustment but have not yet been adjusted due to late approval of Competent Transferring Authority may be adjusted accordingly at the earliest but not later than 4″ March. 2019 under intimation to this Department
CC: 1. PS to Secretary School Education. 2. PS to Special Secretary (Operations). 3 PS to Additional Secretaries (Schools / General) 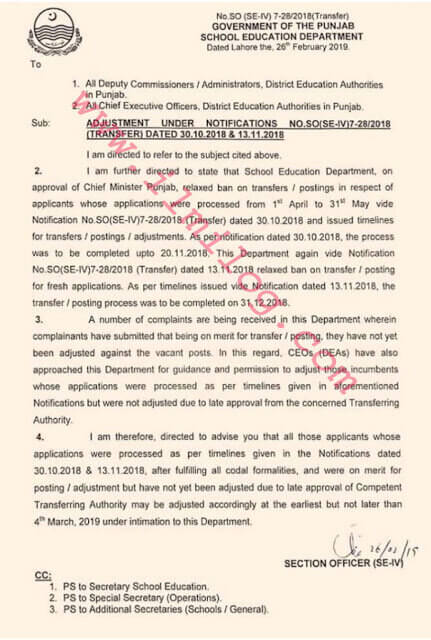