The government has issued a NOTIFICATION No. FO.SR413-3/2017. So, this notification issued Dated: Lahore, the 4th January 2019. However, this is regarding the Notification Financial Assistance Amendment for deceased Employee by a government of the Punjab finance department.

IIn addition, n exercise of the powers conferred on him by Article 241 of the Constitution of the Islamic Republic of Pakistan, Governor of Punjab is pleased to direct that In the Punjab (CIA Services) Delegation of Powers Rules, 1983 the following further amendment shall be made:

You May Also read: Financial Assistance for Family of Deceased Employee

So, In the Punjab (Civil Services) Delegation of Powers Rules, 1983, In Appendix ‘A’, after Sr. No. 22, the following shall be inserted
Advertisement

In addition, 22-A Power to sanction financial assistance in Full powers case of:
(a) Deceased civil servants; and (b) deceased employee appointed or working under the Contract Appointment Policy 2004.”
1. All (Government of Punjab) Administrative Secretaries to 2. The Principal Secretary to Governor. Punjab, Lahore 3. The Military Secretary to Governor, Punjab. Lahore 4. All the Commissioners of Divisions in the Punjab 5. Heads of Attached Departments in the Punjab 6. All Deputy Commissioners in the Punjab 7. The Secretary, Provincial Assembly, Punjab, Lahore 8. The Secretary, Punjab Public Service Commission, Lahore 9. The Registrar, Lahore High Court, Lahore 10. All-District & Sessions Judges in Punjab 11. The Director-General, Audit & Accounts (Works), Lahore
SECRETARY GOVERNMENT OF THE PUNJAB FINANCE DEPARTMENT 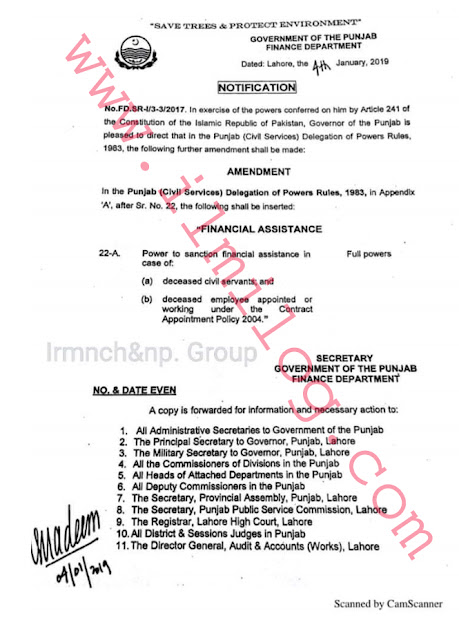