Notification No. LCS (Acct.Misc).2(27)/.2008 dated Lahore, the 1st January 2019 by a government of the Punjab local govt. & community development department regarding chief secretary for the administration about up gradation of accounts related posts.

Subject: UP GRADATION OF ACCOUNTS RELATED POSTS ON RECOMMENDATIONS OF THE COMMITTEE, HEADED BY THE ADDITIONAL CHIEF SECRETARY.
The undersigned is directed to refer to forward herewith a copy of an application dated Nil submitted by Mr. Muhammad Zuhaib Hameed, Accountant (BS-14/LCS), on the subject and to request you to provide the following information/documents to this Department at the earliest to proceed further in the matter:-
I) Whether the Punjab Local Government Board forwarded the case of LCS-Accountants (BS-14) for up-gradation of their posts to the Committee headed by the Additional Chief Secretary or otherwise. If yes in which pay scale recommendations were made for up-gradation. Also, provide a copy of the reference along with annexures made in this regard to the said Committee.
Advertisement
ii) Whether the Punjab Local Government Board has adopted the Finance Department’s circular letter no. FO.PC.40-43/2017 (13) dated 14.12.2018 for the LCS Accountant Of otherwise. If not as to why such cases are being processed before its adoption as such cases are required to be processed after its adoption as per practice in vogue as the LCS employees are not Government Servants.
iii) Whether the post of Senior Accountants (BS-14) exists in Local Government Service or otherwise.
(SARBULAND KHAN) SECTION OFFICER (ADMN-II) 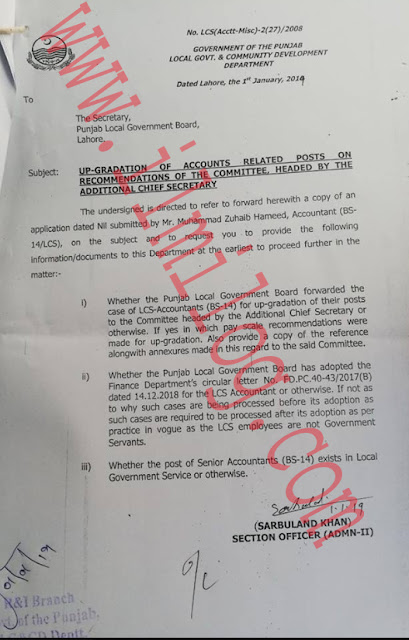