This is a Notification about Upgradation of Computer Operator jobs. The No. FD.PC/40-43/2017 (E) dated 14-12-2018 has issued. the Government of the Punjab Finance Department.
Subject: UPGRADATION OF COMPUTER PERSONNEL ON RECOMMENDATIONS OF THE COMMITTEE HEAD BY THE ADDITIONAL CHIEF SECRETARY

However, I have directed to state that the Computer Personnel carry different nomenclatures pay scales. Similarly,  they have prescribed Qualifications as given in columns B & C below.

The Governor of Punjab has pleased to restructure these posts with prescribed qualifications, pay scales, and designations as given in columns D, E & F below with observations given under the table. 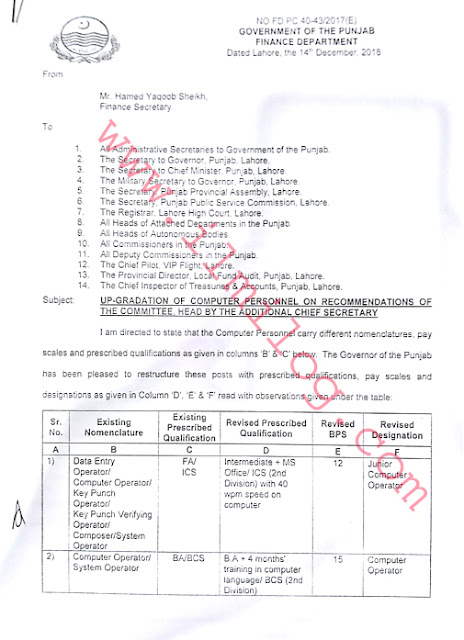 Observations under the Table:

However, a personal scale will continue as personal to such incumbents.

Where the incumbents of the above posts had allowed time scale promotion. So, the incumbents of such posts would place in the care according to possessed qualifications. However, the timescale allowed would continue as personal to such incumbents.

Where only one tier is available, the incumbent of such polls would allow time scale promotion in higher scales. As indicated above after every eight years. However, The fourth step would admissible on possessing Graduation (2nd Division), Service rules would amend accordingly.

The upgraded posts incumbents will also upgrade. Similarly, their fixation of pay will fix at their basic pay stage. So, next above in their lower pay scales with immediate effect, No premature increment is admissible on up-gradation of posts in terms of a policy of Punjab Government.

The expenditure incensed on the above up-gradation of posts shall bear. So, the respective Administrative Departments/ Attached Departments/ Autonomous Bodies. Therefore, No supplementary grant will issue in this regard. 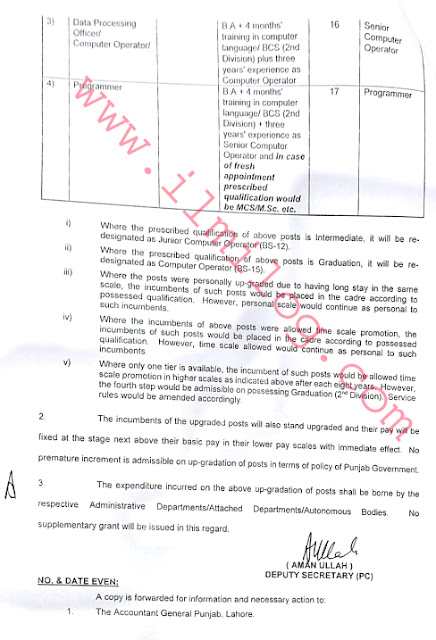