F.No. 8/72/2018) E-II by a government of Pakistan cabinet secretariat establishment division Islamabad 9th November 2018 regarding Prime Minister Pakistan Family Package Deals for Employees Who Die in Service.
The subject of this notification is clarification regarding prime minister’s assistance package for families of government employees die ln service
The undersigned is directed to refer to the subject noted above, and to the notice of the Competent Authority with all Ministries, Divisions/ Attached Dep’t. Sub-offices request for clarifications whether the employees’ services who were appointed under the Prime Minister’s Assistance Package (PMAP) during die period 15/06/2013 to 09/02/2015 may be regularized in accordance with the directions of this OM circulated notification OM No. 8/13/2016-E-2 on 11/06/2018 or otherwise.
Advertisement
Concerned Division issued an Office Memorandum PMAP with PM Prime Minister approval stating that the families of govt. servants who die during the period from 15/06/2013 to 09/02/2015 shall be entitled to avail the benefits of PMAP-2014 which was issued on 20-10-2014. 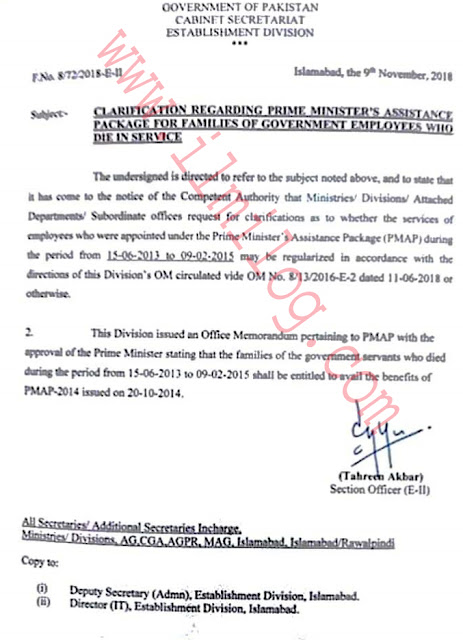