A notification by the Office of the ombudsperson (Mohtasib) Punjab Dated Lahore on the 17th of October 2018. So, the govt has issued regarding Women Harassment Data Protection Act 2010 in Ombudsman Punjab.
I) All Administrative Secretaries. The government of Punjab. 2) All Commissioners & Deputy Commissioners. The government of Punjab All Medical Superintendents of Government Hospital Punjab. All Registrars of Universities in Punjab 5) All Regional Managers of Banks in Punjab.

Subject Implementation of Protection against Harassment of Women at Workplace Act 2010.
I ant directed to refer to the subject noted above and state that the Office of Ombudsperson, Punjab was established under the Protection Against Harassment of women at the workplace Ad, 2010 (amended and adopted by Punjab vide Act Ill of 2013) currently working under their Administrative Control of I&C Wing, S&GAD, Government of Punjab.
2. with a view to creating mass awareness about the provisions of the Act ibid. So, the Ombudsperson, Punjab, has undertaken a campaign name) “Harassment Awareness Volunteer Programmed- in all the districts of Punjab. Therefore, coupled with an advertisement on TV, and the print media.
Advertisement
So, the said Act also requires that all public and private registered organizations establish Inquiry Committees. Similarly, appoint Competent Authorities at their workplaces. So, a lot had been done to create awareness among the general masses and particular working women, but much is required to be done in this respect. A Colored Poster depicting assessment at the workplace has been printed.
In addition, this office reflecting the provisions of the Act. 2010 the copies of the same have been enclosed for displaying at conspicuous places in the organizations under your control where womenfolk work along with men. These Colored Posters may be displayed in all organizations under your administrative control. The lower formations may kindly be directed to e-mail time photographic evidence after the posters have been displayed on the following e-mail address. (Ombudspersonpunjab.guv.pk@gmail.com)
At last, your cooperation in this regard has been solicited for the effective implementation of the Act. 2010.
(SECRETARY) 0/u OMBUDSPERSON, PUNJAB.
Chief Executive Officer Director Education Authority 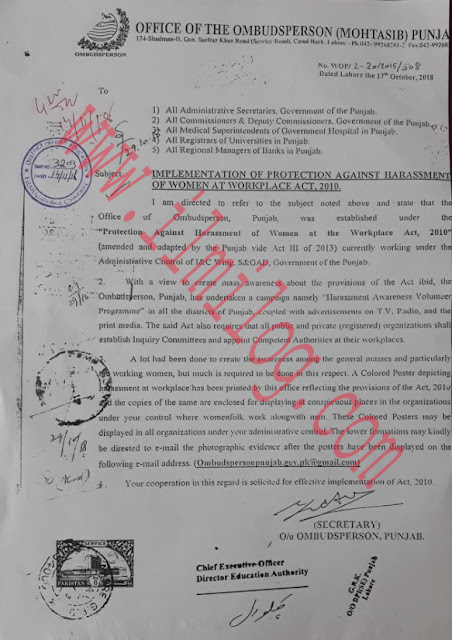 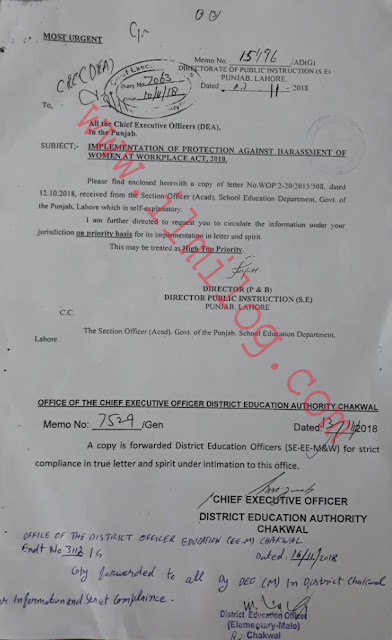