OFFICE ORDER  It is observed that the Government of the Punjab orders of School Education Department has issued vide No.S0(t3udget)1_15/ 2013(Vo1-2) on 15-01-2018, about payment off Inspection Allowance Rs.25,000/ P.M. to the male/ female AEOs Assistant Education Officers, working in SED School Education Department is not checked in Due letter and spirit,
The above-said allowance was to be allowed on monthly basis subject to the Verifiable Key Performance Indicators developed by School Education Department but some DAO’s allowed this allowance to the Assistant Education Officers with the pay of the officers. Which is inconsistent with the rules and procedure. 2. In the light of the position above, the Accountant General, Punjab has now been pleased to order henceforth asunder. – t) The payment of Inspection Allowance allowed to Assistant Education Officers into all over the Punjab with Pay Roll be stopped immediately and should be paid through bills / computer changes after expiry of the month for which the Inspection Allowance is being drawn after fulfillment of requirement, of the said allowance & subject to fulfillment of Verifiable Key Performance Indicators The wage type was created without intervening the comments of the TM & HR Section which has created misunderstanding according to the requirement of the issue. In future, such work should be finalized with full care to avoid any misunderstanding. iii) The payment is subject to verification of the key performance indicators by the respective CEO/DEO in the following month. 3. All are directed for strict compliance (This issues with the approval of Accountant General Punjab) 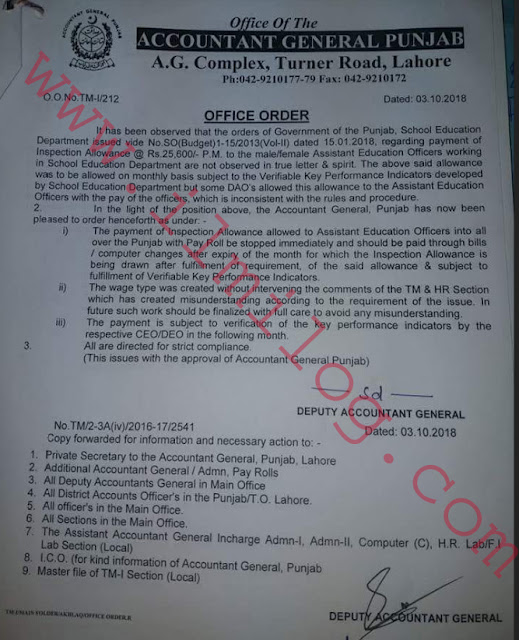