A letter of Project Management Unit Expansion of FWC CBFPW has issued on 10-10-2018 regarding Expansion of Family Welfare Centers & Family Planning works.
It is submitted to Director General, Population Welfare Department and District Population welfare officer in Punjab.
Subject: Extension in Gestation Period of ADP schemes titled Expansion of Family Welfare Centers & Family Planning works and Introduction of community-based family planning workers”
I am directed to refer to the subject noted above and to slate that subject cited ADP scheme was approved by P&D Department up to 30-06-2018 Before expiry of the gestation period of the scheme P&D Department was approached for extension in the gestation period A meeting in this regard was held under the chairmanship of Member Health, Nutrition & Population) P&D Board on 08.10-2018 After detailed discussion it was approved to extend the gestation period of the above cit. ADP scheme up to 31.12-2018 to get the requisite Third Party Evaluation done
Advertisement
Under the circumstances, it is requested that the contract Period Of the employees recruit under the sub, cited ADP scheme. Falling under your purview may be extended w.e.f 01-07-2018 to 31-12.2018 with the condition that no further extension in the contract period of the contracted recruited under ADP scheme tie. ‘Expansion of Family Welfare Centers and Introduction of Community Based Family Planning Workers’ will be made and their contract shall stand terminated automatically after expiry of the aforementioned period. 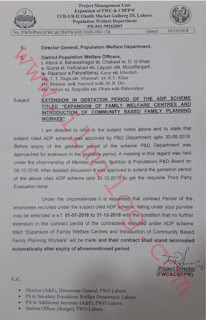