So, Through the upward Mobility Package, eighteen Secondary School Teachers (SST) had awarded BS- 17 an upward mobility package. So, this office has issued vide order No.15934/Ec-1 dated 29-12-2017.
In addition, the court has challenged in above-mentioned order thirty-three Secondary School Teachers (SST) through Writ Petition No. 819/2018 tilted as Muhammad Arif Siddique etc. Vs Government of the Punjab etc. before the Lahore High Court, Rawalpindi Bench, and Rawalpindi.

In other words, the Honorable Court remanded the matter to the worthy Secretary, Government of the Punjab, School Education Department, and Lahore with the .direction to decide the same within 30 days after providing a chance of personal hearing to the Petitioners as well as the department. 5. The worthy Secretary, Government of Punjab. School Education Department, Lahore allowed the representation of the Petitioners vides order No. 50 (SE-III) 7-38/2018 dated 10.07-7018 and operating Para No. 4 & 5 are reproduced as under:
And whereas, It revealed from a perusal of record that contract employees were to be regularized subject to Rule 18, 19, 20, 21, and 21-A of the Punjab Civil Servants (Appointment and Conditions of Services) Rules, 1974. Respondents No. 5-22 were not holding a professional qualification at the time of their appointment. Therefore, their regularization retrospectively w.e.f 19.10.2009 is against the Notification dated 19.10.2009. The higher scale awarded to the respondents under uplift & upward mobility on the basis of seniority list prepared on illegal regularization order is against the Rules / Law. The contention of the petitioners to set aside the order dated 29.12.2017 under which Respondent No.5 to 22 were awarded a higher scale under the Uplift & Upward Mobility Package is plausible. 5. NOW, THEREFORE, I, Secretary School Education Department hereby accept the representation of the petitioners with the direction to CEO (DEA), Chakwal to place cases of the petitioners and respondent No. 5 to 22 before Departmental Promotion / Selection Committee for reconsideration under Notification dated 19.10.2009.
Advertisement

6. respondents No. 5-22 in Writ Petition No. 819/2018 had called for a personal hearing on 26-09-2018. They attended the personal hearing and submitted their stance.
7. From the perusal of the record, it has been observed that order No. SO (SE-I11)7-38/2018 dated 10-07-2018, passed by the worthy Secretary, Government of the Punjab, School Education Department, Lahore has not been suspended by the worthy Chief Secretary or any Court of law.
In compliance with order No. SO (St-110 7./2018 dated 10-07-2018 passed by the worthy Secretary, Government of the Punta, School Don Department, and Lahore and after the approval of the Chairman District ‘Education Authority Chakwal, this office has withdrawn an order No. 15934/Ect dated 2E042-2017
Chief Executive Officer District Education Authority Chakwal 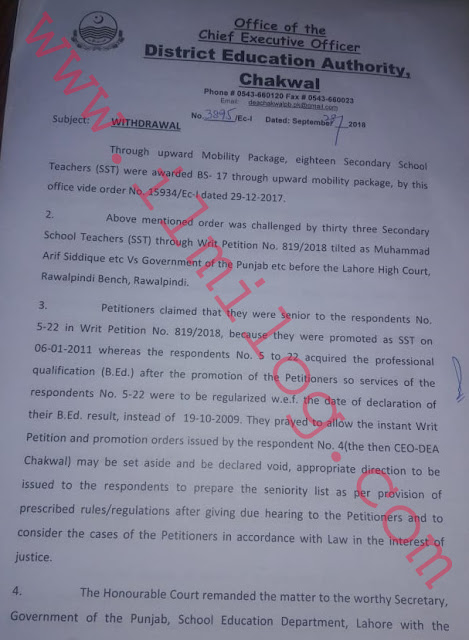 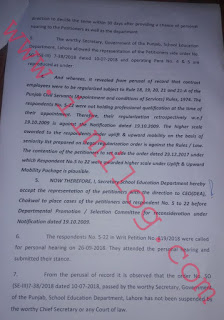 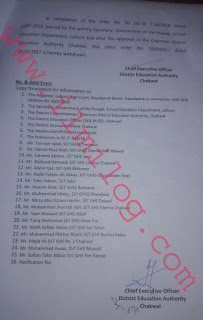