Transfer/Posting Summary has been issued by Government of Punjab Elementary and secondary education department on March 2018 about Posting and Transfer Policy 2018 for Te aching Staff of School Education Department Punjab.
Advertisement

Posting and Transfer Policy 2018 for Teaching Staff at the district level will be made in the following manners as per previous instructions on the subject.
There shall be a committee at each district with the following composition
The committee will recommend transfer and post for different entries at each quarterly meeting at a district. The cadre wise distribution of posting and transfer in each quarter is as follows,
The committee will base all base of its deliberations on the need of the students of its jurisdiction and this will be a primary determining factor.
Compassionate grounds do not include medical grounds for which medical leave or retirement on the medical ground may be sought as provided for under the relevant rules. No transfer from a primary school will be considered if it violates a teacher-student ratio of 1:40. if the ratio at primary school is already worse than 1:40 no teacher will be considered for transfer from that school. The only exception will be commissioning of new schools for which teachers from the most favorable teacher-student ratio in the eligibility may be considered.
The only exception will be
Transfer returning from leave or deputation will be considered against a post in only these schools which have the worst teacher-student ratio in the district.
Any aggrieved party may put in an appeal through proper channels and the concerned DEO will forward this appeal along with detail comments and clear-cut recommendations for director E&SE who will constitute a committee to consider the appeal and pass a suitable order within the parameters specified above.
Violations of these orders will be considered disobedience, misconduct and willful negligence and the person responsible shall be proceeded against under the Punjab efficiency and discipline rule 2011. 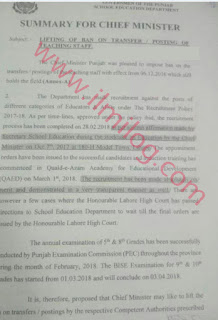 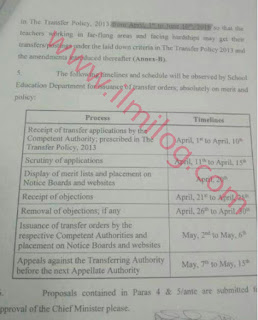