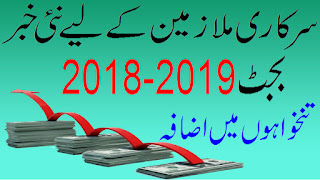 In daily Newspaper it is said that Salary increase for Government Employees of KPK province is expected to increase only 10 to 15 percent.

All provincial governments are preparing budget for fiscal year 2018-19. In this regard all government employees of Punjab, Khyber Pakhtunkhwa, Sindh and Balochistan are expecting to notable increase during this budget but still there is no welcome news yet for these all government employees.
In Dunya News Channel, it is confirmed that there will be 12 to 15 % increase in Pay and Pension. According to the sources it is announced that Pay and Pension will not be increased more than that as said percentage.

News Regarding Pay and Pension Increase 12% to 15%