F.No.2/1/2017-Public is issued by Government of Pakistan inside Ministry dated 10-01-2018 with respect to Kashmir Solidarity Public Holiday 2018 Press Release by Interior Ministry.

This official statement is expressed as ” it is to inform for the overall population that fifth February 2018 will be shut occasion to watch Kashmir Solidarity day with Kashmiris and imply political and moral help in their battle for self-assurance.

This official statement by inside service demonstrates that every single instructive organization will stay shut. It will be an open occasion in the entire nation as an open occasion.

School Remains open Old News:
Notification No. DD (M)/Misc/Vol-VII/2013 Government Of The Punjab Chief Ministers Monitoring Force School Education Department is issued on Kashmir Solidarity Day dated 27th January 2016.
This is forwarded to all the Executive District Officers (Education) in Punjab
Subject:-: KASHMIR SOLIDARITY DAY – 5th FEBRUARY, 2016
Apropos to the subject I am directed to enclose a copy of the letter received from Government of Punjab. Services & General Administration Department Lahore dated 28th January 2016 regarding subject cited above.
2. I am further directed to inform you that Essay writing. Debate competitions and declarations may be arranged in High and Higher Secondary Schools in connection with the Kashmir Solidarity Day on February 5, 2016, with great enthusiasm.
You are, therefore, requested to ensure the compliance the directions in letter and spirit under intimation to this office.
(RANA ABDUL QAYYUM KHAN) DIRECTOR (MONITORING)
1. PS to Secretary School Education.
2. Section Officer (Staff) to Additional Chief Secretary. Punjab, Lahore
3. PS to Special Secretary Schools
4. PA to Additional Secretary (General), School Education Department 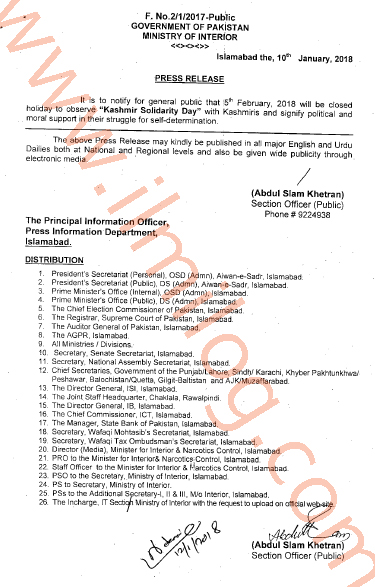 Notification issued by the government of Sindh:

Notification issued by the government of Sindh services, general administration coordination department Karachi. dated the 27th January 2016
The Government of Sindh is pleased to declare 5th February 2016 (Friday) as a closed holiday throughout the Province of Sindh on the occasion of Kashmir Solidarity Day for all offices, independent, Semi-Autonomous body, conglomerate and Local Councils under the Administrative Control of Government of Sindh, excluding essential services. A one minute silence would also be observed at 1000 hours on Su’ February 2016 to honor the ‘Kashmiri Shuhada”. A copy of Notification is forwarded to The Secretary, Cabinet Division. A government of Pakistan, Islamabad. 2. The Chief Secretary, (AJ&K), Muzaffarabad.. 3. The Senior Member, Board of Revenue, (Sindh, Hyderabad (including all Member, Board of Revenue, Sindh. 4. The Additional Chief Secretary (All), Govt, of Sindh, Karachi. 5. The Chairman, Enquiries & Anti-Corruption Establishment. Karachi. 6. The Chairman. Chief Minister’s Inspection Team. Karachi. 7. The Principal Secretary to Chief Minister, (Sindh). 8. The Principal Secretary to Governor (Sindh. 9. The Registrar, High Court of Sindh, Karachi.  Administrative Secretaries (All), Government of  The Chairman, Sindh Services Tribunal, Karachi. 12.The Chairman, Sindh Public Service Commission, Karachi. 13.The Secretary Provincial Assembly (Sindh), Karachi. 14.The Inspector General of Police, Sindh. 15.The Commissioners/Deputy Commissioners CAM in Sindh. I6.The Head of the Attached Department/Corporations/Autonomous Bodies/ Semi Autonomous Bodies/Local Councils in Sindh. 17.The Section Officer (Public) Ministry of Interior, Government of Pakistan. 18.The P.S to Chief Secretary (Sindh), Karachi. 19.The P.S to Secretary (0.A), SOA&CD, Government of Sindh. 20.The P.S to Provincial Ombudsman of (Sindh). Karachi 21.Thc P.S to Ministers/Advisors/Special Assistant to Chief Minister Sindh.
Advertisement
Press Release For Budget:
Federal Budget was presented by federal Minister Mr. Ishaq Dar in the National Assembly and similarly, Sindh Province Budget was presented in the Sindh Provincial Assembly yesterday. Now Budget of other provinces like Punjab, KPK, and Balochistan will be presented.
Punjab KPK and AJK Budget 2016-17
Punjab Budget 2016-17:
The budget 2016-17 of Punjab province will be presented on 13th June 2016.
KPK Budget 2016-17:
The budget 2016-17 of Khyber Pakhtunkhwa KPK province will be presented on 14th June 2016. KPK Finance Minister Muzaffar Said Advocate will present this budget before provincial assembly session.
AJK Budget 2016-17:
The budget 2016-17 of Azad Jammu & Kashmir is expected to present between 15th June 2016 to 18th June 2016.
Pay and Pension for Govt. Employees:
It is expected that same increase will be in the pay and pension of the Govt employees as it is announced in the Federal and Sindh Budget.
This increase in the pay was 10% with merging of two previous Ad-hoc Allowances of the year 2013 and 2014 and 10% increase in the pension of pensioners.